Despite a shaky performance, nobody is really taking him on. 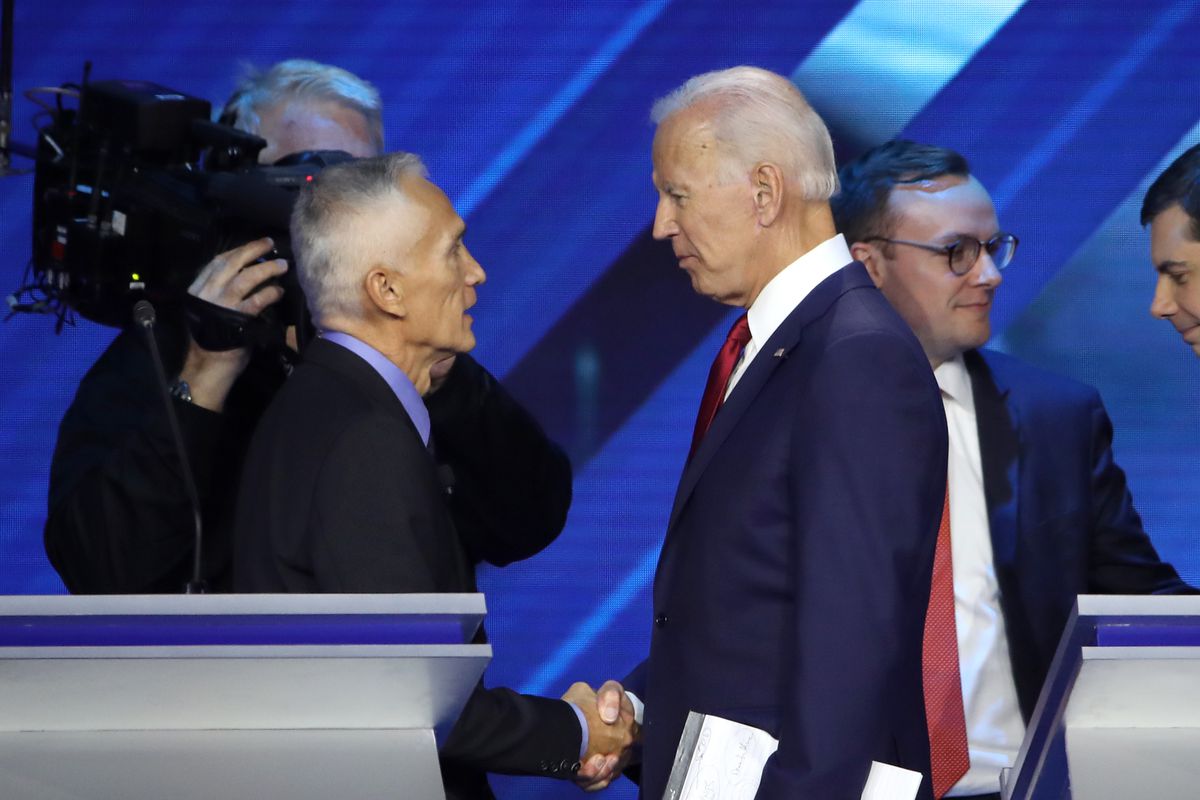 According to every poll I’ve read, if the Democratic presidential primary had been held on Monday, former Vice President Joe Biden would’ve won. And after watching Thursday night’s Democratic primary debate, it seems to me that the same thing would be true if the primary was held the next day.

Through hours of sometimes exciting and sometimes tedious arguing, no candidate laid a real hand on the frontrunner. And what’s particularly striking is that barely anybody tried.

The dynamic is an eerie echo of the scenario that played out in the 2016 Republican primary. It seems absurd to compare a loudmouth reality television host to the former vice president. But in both cases a candidate with a base of older working class voters leapt out to an early lead. And now Biden’s main Democratic rivals — just like Trump’s four years ago — are acting like his campaign will collapse on its own and they do not need to take him on.

But while Biden does not look to me like any kind of unstoppable political juggernaut — he misspeaks constantly, rambles oddly at times, and does not have a particularly impressive record across his several decades in the Senate — he’s a popular former VP to a popular former president.

And, crucially, the Democratic Party primary electorate as a whole is more moderate than Biden’s two main rivals, Sens. Elizabeth Warren and Bernie Sanders. Warren and Biden used their stage time Thursday to remind voters of this, flanking Biden to his left — and left of the typical primary voter. The rest of the field by and large didn’t even bother to attack him.

If these dynamics hold, Biden could easily cruise to victory.

Criticism from the left isn’t taking Biden down

Warren and Sanders are neck-and-neck for second place and both tangled with Biden a little bit on the issue of health care. They’re proponents of a Medicare-for-all system, and they both make a good case for it.

This is not an effective strategy for taking Biden down a peg. We’ve seen for months now that simply staking out policy positions to Biden’s left doesn’t take him out of first place. That’s not because voters haven’t heard the message, but because most Democrats say they consider themselves more moderate than Sanders or Warren and as of the beginning of 2019 most Democrats said they want the party to go in a more moderate direction.

What’s even more striking, neither Sanders nor Warren really tried to make an argument about why it would matter to put one of them in the White House rather than Biden. A Medicare-for-all bill is obviously not going to pass Congress in 2021 — Amy Klobuchar and Kamala Harris were right there on stage explaining they don’t support it and lots of Democrats are more conservative than those too — and a mandatory gun buyback certainly isn’t. There almost certainly are real differences in how the different candidates would approach governance, differences that would manifest themselves in executive branch appointments and regulatory policy.

But nobody talked about that. Instead, several of Biden’s rivals staked out policy positions they can’t deliver on and that it’s not clear Democratic primary voters even want. Other more moderate candidates, meanwhile, just got lost in the shuffle.

Political stats geeks generally think, based on her past electoral track record in Minnesota, that Amy Klobuchar has a very strong electability argument to be made on her behalf.

And throughout the campaign she’s stuck to an electability-focused formula, advancing popular progressive positions — a higher minimum wage, an assault weapons ban, a public option, an antitrust crackdown — while avoiding politically risky ones. When talking about criminal justice, she was the only candidate to strongly emphasize that communities of color’s need for fairness extends to a need for law enforcement to arrest the criminals who prey on them. If you listen closely to her answers it’s easy to see why she runs ahead of other Democrats statewide in Minnesota — she’s a very smart, nuanced politician.

It’s certainly possible in theory that electability-minded moderate Democrats could be convinced to go for Klobuchar. Her election results are better and more recent than Biden’s. She’s younger, she’s a woman, and she doesn’t need to defend things like a 2002 vote to authorize the war in Iraq or issue a complicated semi-defense, semi-apology for the 1994 crime bill. But she would have to actually go make that case instead of drifting off to irrelevance and occasionally sparring with Bernie Sanders.

Pete Buttigieg and Beto O’Rourke, similarly, look like people whose campaigns have totally lost relevance. Both men have at times become darlings of Democratic Party professionals who want a youthful energetic alternative to the rising forces of the left inside the party. But the whole premise there is that Joe Biden is not youthful enough or energetic enough — something neither of them want to actually say, which leaves them flailing. Of the entire field, only Julián Castro seems to want to address the elephant in the room but he’s poorly situated to do the job.

Julián Castro, the exception that proves the rule

In contrast to the other eight people on the stage, Castro twice took shots at Biden’s age. Once he accused him of having “forgotten already what you said two minutes ago” and quipping “that was a lot” after Biden delivered a rambling answer that somehow started on education and ended on Venezuela.

Framed as under the table jabs rather than an above board argument that 76 is too old, Castro came off as mean-spirited even though polls do show that concern about a septuagenarian president are widespread.

But worse for Castro, he even more than Sanders and Warren is specifically associated with ideas that terrify electability-minded Democrats. He’s the one who initially injected the idea of decriminalizing illegal immigration into the primary and she’s the one whose done things like hit Sanders from the left on reparations.

As a housing policy junkie myself, I have a soft spot for Castro who build on his experience as a big city mayor and former HUD Secretary to deliver what’s probably the best housing program in the race. But nobody currently backing Biden over Sanders and Warren is going to suddenly flip to Castro over age concerns. If you think of him as auditioning for a job as Warren’s vice president, it was arguably an impressive performance, but that’s all worth nothing if Biden becomes the nominee and right now it looks like Biden’s going to be the nominee.

Biden’s lead in the polls is not exactly unassailable. There will be more debates and more moments and there’s plenty of time left for him to lose this thing.

But most of the candidates in the field seem to be acting as if there’s some law of nature that will magically cause him to lose even without anyone really going after him in a persuasive way. The voters’ current views, however, seem very clear. A large minority of them want a left-winger like Sanders or Warren but the majority do not, and that more moderate majority sees Biden as their champion. Sanders or Warren could change that dynamic by trying to assuage Democrats worries that they are too far left, but currently they are too locked in a Cold War with each other to do that.

And any of a wide range of non-leftist Democrats could try to offer a fundamentally non-ideological critique of Biden focused on his age, his speaking fees, his son’s weird shenanigans, and other weaknesses. But so far all they seem to want to do is spar with Warren and Sanders and warn about the dangers of going too far left.

As the author of takes about how swing voters are real, persuasion is important, and moderates do better at winning elections, I certainly agree with those warnings. But many rank-and-file Democrats who agree are currently going for Biden, so simply repeating the warnings only leads to further circling of the wagons. Unless something changes that dynamic, he’s going to be the nominee.